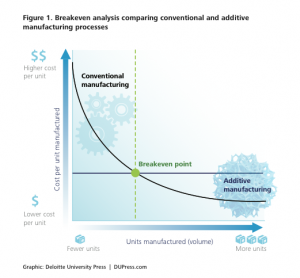 The change wrought by the Industrial Revolution altered the fabric of industry itself. New technologies required large amounts of capital to develop and deploy. In order to justify such investment, similarly large quantities of product were required to amortize the investment over many individual units of production. Thus, the era of mass production was born. This era is characterized by large-scale, centralized, industrial operations that arose as a result of the technical capability to exchange capital for labor.

AM impacts the economics of production by reducing minimum efficient scale. In some cases, AM may allow consumers to satisfy their individual needs with- out the significant labor or capital investments that might have previously been re- quired. Research supports this conclusion. Multiple economic studies illustrate that minimum efficient scale for AM can be achieved at low unit volumes—as low as one. This cost performance contrasts with that of traditional manufacturing methods that face higher initial costs for tooling and setup.

Figure 1 illustrates a prototypical set of cost curves for AM and traditional manufacturing methods drawn from existing studies. The cost curves illustrate the change in average cost for each incremental unit of production. Breakeven between two alternative production approaches occurs where these curves cross. Figure 1 il- lustrates the achievement of minimum efficient scale for AM manufacturing, in this case, at one unit.6 In essence, the average cost curve is flat, suggesting that marginal cost does not change with volume. More traditional production methods may as yet yield cost advantages at higher volumes, as suggested by the declining cost curve.

The research concludes that AM production, using a variety of materials, can provide an efficient alternative for low-to-medium-sized production runs. Further- more, expected reductions in material costs leave open the potential for breakeven points to substantially increase in the future.

Improvements in throughput and reductions in the cost of AM equipment can only serve to further amplify these ef- fects, increasing the production quantities at which AM might compete with more traditional manufacturing methods.