“Do you remember the first thing you ever printed out? I made a family newsletter, birthday cards and signs on a program called The Print Shop. What made a printer useful at home was self-evident: It made anyone a publisher.

Now we’re entering the era of machines that can fashion ideas into tangible objects.

The 3-D printer has arrived at home—what you’ll print with it isn’t as obvious.

From the digital file to the finished object, a primer on simple, desktop 3-D printing.

Is a 3-D printer like an infinite dollar store on your desktop? (You’ll never have to buy a comb again!) Is it a factory for lost Lego pieces and IKEA parts? I’ve been using two models from MakerBot, including the new entry-level Replicator Mini, on a quest to figure out why anyone might need one.

I printed dozens of plastic doodads—bottle openers, little chains that materialize already linked, even a Mr. Snuffleupagus toy. Yet I haven’t yet found a killer practical application that makes a 3-D printer a must-have household appliance. You’ll be disappointed if you hope to justify the price of a MakerBot Mini with fewer trips to Target.

But what the Replicator Mini has going for it is a combination of hardware and software that makes 3-D remarkably accessible. MakerBot wisely realized that few of us have 3-D design expertise. So it augments its printer with an iTunes-like store for downloading printable objects, an app—also called PrintShop—to design your own items and an active community that keeps giving you reasons to make things.

A number of other upstart companies are starting to sell inexpensive 3-D printers, including 3D Systems’ $1,000 Cube 3 and XYZprinting’s $500 da Vinci. But MakerBot’s Replicator Mini is 3-D printing’s biggest step yet into the mainstream because it succeeds in enabling pretty much anyone—tinkerers, children and parents playing Bill Nye—to create.

The MakerBot Replicator Mini, shown with toys it can print. F. Martin Ramin/The Wall Street Journal, Styling by Anne Cardenas
The Replicator Mini still has rough edges, and given the hype around 3-D printing, it’s worth resetting expectations. It’s a shrunk-down version of the rapid-prototyping machines used by engineers and architects. You can print things up to the size of a coffee mug—3.9 inches square and 4.9 inches tall.

You’re also limited in material to plastic about as rigid as a soda bottle cap. You feed the printer spools of a nontoxic plastic called PLA that smells like pancakes when it melts. (Really—it’s derived from corn.)

The printer works like a very precise glue gun, heating up the plastic to more than 400 degrees, then squeezing out intricate patterns.

The Replicator Mini sits on your Wi-Fi network, taking instructions from a computer or iPad. It’s more reliable than previous models and has done away with annoying steps like leveling the plate where objects are printed.

The Replicator Mini’s moving parts bark loudly, though the company says an update should lessen the noise. Watching it lay out lines of plastic is a Zen experience—but a pocket comb takes an hour.

The Replicator Mini streams live video to its app of the action inside the printer. That’s more than a gimmick: 3-D printers can go haywire if their plastic supply gets stuck or an object gets loose. My pile of earlier printer failures includes a jetpack-wearing bunny with truncated ears. ” A lot of interesting 3D Printing press 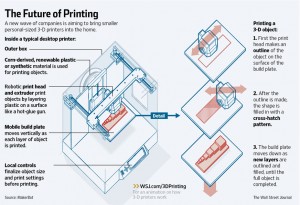